The sunny South has been pretty darned cold these last several days, so Dearly Beloved decided it was time to fire up the pilot light for the gas logs in our den.  The logs were here long before we bought the house and frankly, they’re showing their age, but we do love having a fire in the evening.  Every year we talk about replacing them with a prettier, more efficient model.

DB also wants to have gas logs installed in the fireplace in our downstairs playroom.  Oh, and a large flat screen TV.   He wants to make the room his office.  I do catch a whiff of man cave to his plan.  Although the fireplace down there has never been used, it has a hook for hanging a pot in it.  When I first saw it, I pictured us down there snuggling on the sofa in front of the fire during power outages, homemade soup bubbling in the pot.

Two problems with that.  First, it’s much simpler to drive to a restaurant with power than it is to assemble ingredients by flashlight.  Secondly, we don’t have an iron pot.

It’s always a chore to get the pilot light going.  No flipping a wall switch; it’s a messy,  inside-the-fireplace job.  This year, DB decided to work on the logs first to see if he could make them more efficient.  That entailed a few trips to the garage to assemble wrenches,  pliers, etc. 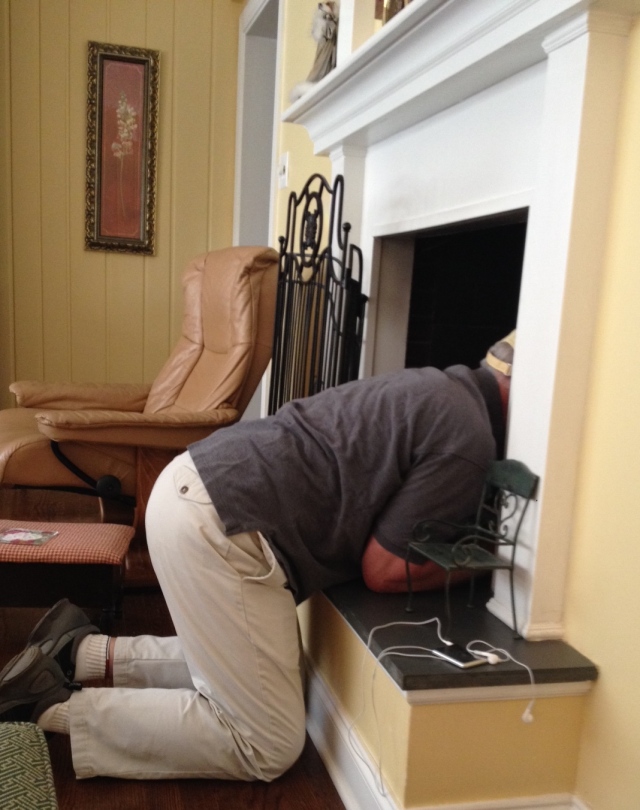 I was sitting close by, watching all this.  Finally, he was ready to strike the match.  Just before doing so,  he pulled his head back out,  turned to me and asked,  “Do you want one last look at these eyebrows?”