Our neighbor decided to hang some of those large, lighted Christmas balls on the trees in her front yard this year, no small undertaking for a woman who lives in her car.  Well, practically.   Hauling her sons to all the practices, games, and school activities that go with young boys these days, she probably racks up more miles than a long haul trucker.

She bought the materials, made and wrapped the balls, dug up the electrical cords, and headed outside.   Now it was time to attach those balls and electrical cords to the limbs in the tall trees.

All that hauling the little guys to practices appeared to pay off.  She had them tie a rope that was attached to an electrical cord around a small football and they took turns tossing it over the branches until they hit pay dirt.  It wasn’t easy. The suckers on the limbs either blocked the football or kept the rope from pulling along the branch properly.

Nevertheless, they hung three balls that first day before heading off to basketball practice.  A day or so later, she brought out more of the lighted balls to hang and the football tossers ran into the same problem, particularly with one limb.

That’s when Dearly Beloved, wandered up our driveway and came upon the scene next door.  He and Scout, our Wonder Dog, had been heading out for a walk, but he couldn’t resist stopping to give advice:  “Now just calm down. “

(If I could rip those words from his vocabulary, I’d make a stab at it.  It’s advice he gives to me, to the dog, to various athletes and referees on television, to politicians. . . arrrggghhh!  My blood pressure is going up just thinking about it.  I’m sure the neighbor was ever so thrilled, too.)

Finally, Mr. Calm couldn’t help but join in the toss to get the rope in the right place.  As he was doing so, he presented his bona fides by telling them about The Chandelier Incident in the previous post.  Now, I wasn’t on the scene, but as I understand it, he did make a successful toss.  Just as he gave his “There!  I fixed it!” grin, our neighbor pointed out that when he’d yanked on the rope, it had detached the electrical cord,  so what they had at that point was a rope dangling from a tree limb, too high to reach.

At that instant, Odessa, who I used to refer to as the wonder dog before we got Scout, came flying out their front door at warp speed to show off her wonder-ness.  She ignored the assemblage there and dashed across the street, pausing a few seconds for a quick sniff at a tree.  Scout ran over to join her.  DB was calling Scout and the neighbors were calling Odessa, so at that point I went outside to see what the commotion was about.  Everyone was yelling.   I resisted the urge to say, “Now just calm down….”  Instead, I began yelling, too.

Scout came back, but Odessa took off again and turned the corner at the end of the block, racing toward the busy street nearby.  She was out of sight in no time.

I brought Scout into the house and DB took off after Odessa.  He said later that he stopped  and asked several people had they seen a brown dog.  She’s a bit hard to describe.  (Well, she wears her hair parted down the middle….)  One man said that he’d seen “a brown blur” run right through the traffic and kept going.

One of our neighbor’s friends happened to spot Odessa some distance away and was able to coax the dog into the car.  The friend was driving over to our neighbor’s– to pick up the boys for basketball practice, of course.  In the meantime, because DB’s phone charge had run down, we couldn’t call to retrieve him, so Odessa arrived home well before he did.

The rest of the Christmas balls have been hung now.  I’m not sure when it happened; one day they were simply there.  Perhaps in the middle of the night when she could do so without the intervention of man, beast, or ball practice. 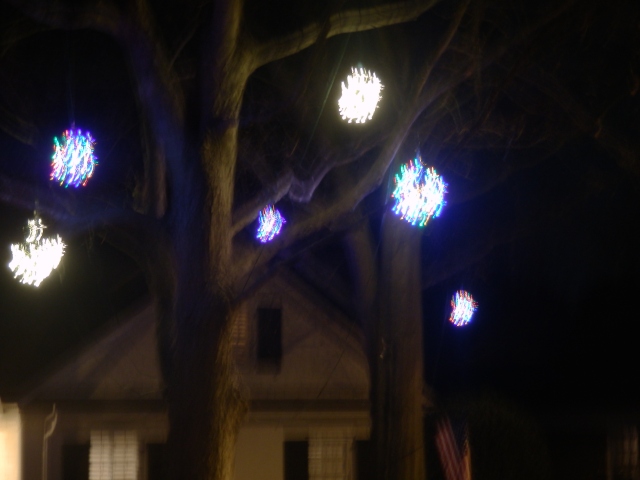 7 thoughts on “Calm and Bright? Not Exactly.”